The WSOP 2007 is over – for us. Both Katja and I have been eleminated from the $10,000 buyin Wolrd Championship No Limit Holdem tournamen, better known as the main event. We played day 1C with about 1,700 other players. Katja and I have been sitting near to each other, on tables 53 and 50.

The event started good for me, I increased my stack to about 26,000 from the initial 20k without any showdown. I had not any good or known player on my table except young Jonas Molander from Sweden. I knew Jonas from the EPT tour and watched his style. He is a very good player, not as agressive as other scandinavians but also not afraid to put in big bluffs. Anyway, Jonas and I saw not one single turn card together during the 10+ hours we have been sitting togehter and I guess it is fair to say that we avoided each other, well, maybe it was only me avoiding him and him not catching any cards when I was in the hand.  At the end of the first level (levels are two hours) when half the players have already stood up to leave for the break I received :As:Ac in late position and was called by the player in the big blind. Of course, I lost the hand and a huge pot because he did not believe me anything, called all my bets on the :Js:Qc:3h :2c :7d board and raised me on the river. I made a crying call into the gigantic pot and got shown :7x:7x. Uff, Now I was short with like 14k or so and that changed my tournament play dramaticlly. I was thankfull for the break as I was really on tilt after this hand. That not even changed during the next 1-2 hours in the next level when visions of "revenge" and "outplaying this guy" bothered my mind. Actually I did nothing like that but I took the beat not as well as I could have or should have.

Very carefully I rebuild my stack to like 22,000 when I received :Qh:Qd UTG, made a raise to 1,400 on 200/400 blinds, no ante, and got reraised by a tight lady in the big blind, but only by 1,000. The raise was strange and I even thought about her throwing in the wrong chips. After looking at her I put her on AK or AQ and made a re-raise to 5,000 total, ready to give it up if she re-reraises. She only called, but quick, confiming my thought she had a hand like A-K. Now, the lady had like 45,000 chips as she had busted another player shortly before, so she got me covered by far. The flop comes :Kd:Th:4h and she checks. Without any hesitation I made a bet of 5,500. 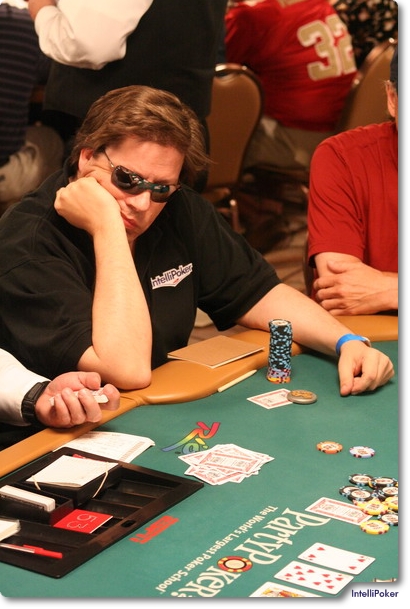 This is the hand where I had pocket queens

The lady asked me how much exactly I have left and anocuned "I am all-in". Wow. This could only mean two things now: either she is outplaying me, acknowleding the fact that I made a bet that leaves me enough chips if I fold or she has a hand. Like :Ax:Kx. When thinking about the situation (and I did think long, like 3-4 minutes) suddenly the thought of her having :Ax:Ax flashed my mind. Nothing against ladies in poker (lol Katja) but many of them have a, let’s say diferent,  playing style. Now I saw that min-reraising preflop in a different light. When looking at her she showed no sign of being nervous. Finally I thought the chance of her having me beat is too high and the value of surving is too big, so I folded, under pain.

There I was, down to 10k in chips after about 3 hours into the tournament. Now, from about 3 p.m. until 11 p.m. that did not change. I was absolutly card dead and could only manage to keep my chip stack by well placed raises or re-raises which have been bluffs in 100% of the cases. There have not even been semi-bluffs with hands like suited 89. My best hand in this time was :4c:4s on the button which I raised, got called by the BB (yes, the player who had beaten my AA earlier on) and on a checked through board I managed to beat his :As:Js. Katja stopped by from time to time reporting about her rollercoaster ride from "all the chips" to "almost no chips" several times (she lost two brutal hands in one level, both times with pocket QQ when the money went in she was a huge favorite). 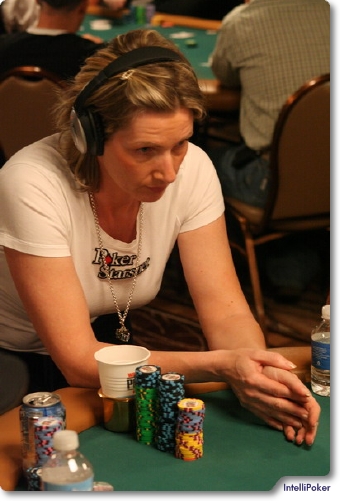 Inbetween we went to the dinner break with Andreas Krause, Michael Dombrowsky from our news team and a guy from texas with is wife. We had lots of fun there.

At 11 p.m. I was picked up as the player in the BB and got moved to a different table, right next to my old table. Now I was starting all over, knowing nothing about my opponents, which all had me covered by far. I had 12,000 chips at this time. Right in the first hand I got :Ad:7c and the player in the cutoff raised to 2,000 which I called. Flop was :Ax:Tx:8x and I bet out 3,000. The guy raised me to 6,000. Hmmmm. I looked at him, he looked like not feeling comfortable so followed my instincts and called. The turn brought the :9x and with my top pair and OESD I went all-in right away for about 8,000. Imagine my horror when the guy insta-called me – I was sure to be shown a hand such as AQ now and be way behind. To my delight he showed :Qc:Th for middle pair and a gutshot. The river blanked and I doubled up to over 25,000 in chips! Right after that I manged to steal a few blinds and was at almost 30,000 suddenly with the average being at like 38,000.

Finally, I made my "bustout" mistake. I flat called a raise to 2,200 from the player UTG who had shown some marginals hands already with me holding :9d:9h. The flop was :4d:5d:6h and he bet like 4,000 which I raised to 10,000 with my overpair. He thougt for a little while and then pushed all-in having me covered by far (with over 100k in chips). Somehow the fact that he had so many chips made me suspicious and I thought about an overly agressive push with just overcards (well, good example of wishful thinking). I called for all my chips, got shown :Ah:Ad, received no help on the turn and river and was out at exactly midnight.

I went to Katja, told her that I was out and about to go back into the hotel. She said I should wait, she is about to push also with just 11,000 chips left. I strolled around for like 5 minutes but then thought that this is bad policy, wait for your wife to bustout of the tournament, went back to her and told I will leave which I did. Being back in the hotel room about 10 minutes later first thing I saw on the internet: Katja Thater eleminated. Before even able to scroll down and read about the details I heard her opening the hotel room door. The busted out 2 hands after I left her with :Jx:Tx on the button but the small blind found :Ax:Jx and won.

What now? Katja has media work to do and our kids will arrive today here in Vegas so we will probably to a week of vacations now. And should we be hot for some tournament action, there is a 10k buyin WPT event starting in the Bellagio by tomorrow 😉