Finally, I could not resist. When I heard that the WPT Bellagio $10,000 buyin event added a third starting day I thougt about playing there. Play started at 12:00 and at 11:30 I finally decided to play. So I went over to the Bellagio, bought myself in and arrived on my table just on time. In position after me: 3 young scandinavians, one one of them to my direct left known to be the most fearless and most aggressive player type, Henning the speed poker world champion and one more of this type. Between them: skillfull, aggressive Irish player. Behind them: agressive asian player I know from cash games. Oh well.

This list does not include all those unknown (to me) high stakes cash games players from the Bellagio, a lot of european players and some more. Considering my personal experience on each nine handed table have been one weak spot (on my table that would have been probably me have there not been one total monkey). I started playing tight. Only 10 minutes into the tounament the young guy to me left was already all-in (20k start chips, blinds at 50/100) – on a bluff of course. One of the other scandis called him with an overpair on a super dangerous looking board, won, shrugged, explained that he would only call this special player and doubled up early. The scandi was quickly replaced by a abc playing guy who was defitily more easy to play with. After the first break I still had 20k in chips and the expanded our table to 10 handed – the new seat not being played. I knew it right away, it had to be Phil Hellmuth (only other guy still missing was Phil Ivey). Phil arrived after about 3,5 hours in a golden race driver suit that looked so fking bad that I had to really laugh over it. This was the only to smile as I had just lost :As:Ac vs. :Ah:7h in a big pot for 14k total. I had no conversation with Phil and played no hand against him, he overall played only like 90 minutes before busting out.

One word about the WPT Bellagio management: this is the way to run poker tournaments. Besides the beautyful fontana room, the big tables, comfortable chairs, perfect dealers and floor persons they treat you right. Example? In the afternoon I got hungry and ordered some food (yes, at the table, from a menu that is a mile long and includes about everything the hotel room service has to offer). Food came quick, the waitress searched and found a chair for me to put the food on and when I asked how much I need to pay she explained: "Oh no, that’s complementary". What?? I was stunned. The food was also very very delicious and this is just an example of how good it is over there compared to Harrah’s with their rip-off policy. Not to mention, everybody playing the tournament was invited to visit the famous Bellagio buffet after the tournament – with a guest, for free.

Ok back to play. The structure for the day was play 5 levels, 90 minutes each, with 15 minutes breaks in between. No dinner break but being finished at about 8:30 p.m., also a very good thing, gives you some time on the day. I was already short as explained after losing AA and doubbled up with :Ax:Kx vs :Ax:Qx in level 3 and had like 16,000 chips then. The things got rough: I had pocket :5c:5d with a :5h on the board – and folded on the turn! How right I was I saw when when the other two guys had a better set and a straight flush draw (the set won). Shortyl later I lost another pot when I had :Js:2s in the big blind, saw a free flop with :As:Jh:3d, it was checked 5-way and the turn brought the :Jd. I made good sized bet, all folded except the asian guy who was playing solid poker. The river blanked and I betted like 4,000 with 8,000 left behind. Now, he raised me by 5,000. Oh that sucks. After some deliberation I folded, showing the J. One guy from Kuba could not believe it. The asian guy nodded to me. I was down to like 8,000 and right after I posted the small blind in the next hand our table broke and I was moved to a new table, diretly into the big blind (400m 50 ante) again. Argghh. George Danzer was on my table as well as Joe Seebook. In my very first hand George raised, I pushed from the BB with pocket :7x:7x and George folded. Soon after I raised in MP with :Jh:Jd and George pushed all-in from the BB with :Tx:Tx, being shortstacked also. I called and won. Now I was back to like 20,000. 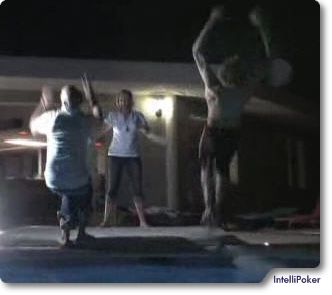 I was in bad mood for like 30 minutes but then we went over to the house of the hochgepokert team and had a nice BBQ along with good "pool action" there. Thanks very much buddies!