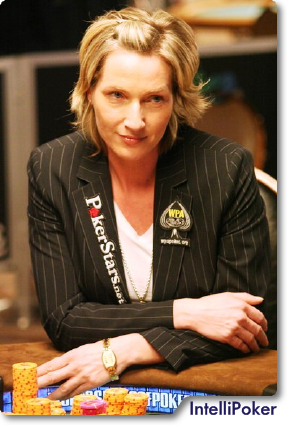 Congratulations again to Katja for winning the $1,500 Razz event here at the WSOP and getting the conveted gold bracelet. I was really proud for her and I think the did an awesome job in this tournament. She played 3 days for a total of 38 playing hours (including breaks) to finally win the thing vs. tough competition. Alone on the final table have been lot#s of bracelets:  Mark Vos, O’Neil Longson and Men "the Master" Nguyen have 13 between them. O’Neil have won this event already before  and is by many considered one of the top lowball players and had he had a demanding chiplead going to the final table. Anyway, nobody could stop Katja on that day. She played focused and aggresive. In two instances she played even to agressive in my book and I was a little scared that she can’t change gears back when needed. But no problem, she slowed down as needed. I railbirded her for much of day 2 and 3 and was very pleased with the way she played. The very same is true for the Ladies Event where Katja got 5th from almost 1,300 ladies where she played very good for long hours (but then failed to continue doing so in the last hour of the tournament).

Now Katja has a WSOP bracelet, something some people especially in the german community seem to be having a problem with. For some of those, let me clarify a few things: of course the bracelet means a whole lot to Katja – businesswise. It confirms her play, is a good marketing tool and proves some success. Now, both Katja and I are the first to admit that just winning a tournament (even a star studded, complicated game, long hours tournament like this) means nothing by itself. Everybody can. It is the consistancy that separates the successfull from the losing players. In this sense this win and the bracelet itself does not mean much for Katja. Winning there or betting busted on the bubble is not really a difference if you are comfortable with the way you played and handled the situation. The rest is just that – variance.

Katja gave a lot of interviews right after her win, the most watched the one on PokerNews and here on IntelliPoker. The english community on 2+2 took it quite well while the german communites are backbiting about her arroganz. I think they want her to say "This is a dream coming true, I won this not alone for me but for my country, god and everybody who has ever posted in a forum". Nothing of this is true. It was not her big dream to win it, it was a professional goal. She did not won it for Germany or God as none of those has ever paided her bills. And for the people in the forums – well, some of them should be aware that sometimes in the poker world the anonomity is broken and people will meet each other face to face. We’ll see what they say then.

I mean, seriously, what some online players might not be aware about: playing live poker for a living requires a certain attitude. While online you don’t see the emotions of your opponents live you are directly confrontated with them. Alone outplaying that poor guy with the desperate face and his very last money on the table just another time requires not only the skill to do so but also the will and "killer-instinct" to do so. Your embaras you opponents, make them leave the the table or reload in front of a full audience. Young players like Sebastian (miami) know what I am talking about as this has be subject of numerous discussions between us – in fact that is one thing very difficult to learn and handle about live poker. I believe this is the reason why so few woman play live poker (successfully) – this mentality is not for everyone and obvious not for many woman. If you look at womans like Jenifer Haarman or Cyndie Violette at the poker table you look into mercyless eyes.

Regarding my own play there is not much to add – I was the first one out of the $3,000 limit holdem event, I did not survice the first round of the heads-up event where I played vs. Lee Watkinson, a very nice guy. After like 90 minutes of play I called a raise with :6d:5d and saw a flop of :6s:6c:5s – flopped boat! Some chips went in on the flop and turn, when a :Qh appeard on the river all the money went in but Lee had :Qs:Qc and won. Yesterday we liked to play the Omaha H/L event but we got "stucked" and could not make in time. As we are leaving home on Sunday we wont play any more tournaments before coming back on July 5th, where Katja playes the "Ante up for Africa" event and we play our first day of the main event on "Day 1C".