Bellagio, where the dealers have Bracelets

After my unpleasant exit on Friday I decided to skip the $1,500 event on Saturday because it was looking like a big sellout again and I don’t like those large fields – nahh, I am not going to fool you. When I realized I had not yet bought my ticket for this event I went to the cashier, saw an endless line of players trying to buy into that one and had simply no idea of waiting 4+ hours for that event. 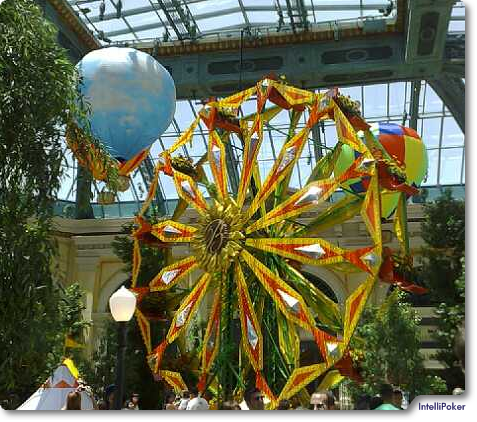 The Bellagio is running it’s "Bellagio cup" series right now and I decided to go there, they had scheduled a $5,000 event for this saturday. I bought myself in and was trying to take my seat at 1 p.m. when I got informed that it has been re-scheduled to 2 p.m. so I went to local "Noodles" and had a fantastic lunch there. When I got back shortly before 2 I was informed by the waiting dealers that I am probably "on the final table already" as there have been only 8 entries so far. When the tourney finally started it have been 23 and it filled up to 37 over the course of the following 3 hours (they allowed for such late entries). I was playing good and builded a stack before I ran into a draw holding top two and the draw arrived so I was below average after 4 hours of play (60 minutes levels). With 15 players left (5 in the money) I found :Ks:Kc under the gun, raised and was called by Paul Testud only – the flop looked harmless with :7c:7h:3s so I went all-in but he smiled and called, opening pocket :7s:7d for flopped quads. The field in this tournament was strong as one can expect, on my first table have been Josh Arie, Roland de Wolfe and Michael "TheGrinder" – TheGrinder impressed me the most of all, I had never really played with the guy before and he was strong force on the table. He has fantastic reads, plays fearless and reckless and did build a large stack which eventually vanished when he got very unlucky in three hands in a row (in two he got the money in as a large favorite, in one he flopped two pair with a straiht draw vs. bottom set). I never thought much of the guy so far but honestly he impressed me and showed me there is a whole different, advanced level of play to reach. Thanks for the lesson.

When we have been talking to a dealer, the dealer explained something like "I am more a player than a dealer" and continued with "I have won a bracelet on my own already" – and true it was, the guy won the $2000 limit holdem event in 2003 for $450,000. Wow impressive! Must be shame for the guy dealing to all the clueless people there day-in and day-out. But thats the Bellagio – the best of everything.

My WSOP appreances on Sunday and Monday ($3,000 NLH and today’s $2,500 6max NLH) have been short, I played not even two hours in each of those. My play was not perfect for whatever reason and I in at least one case I made a huge mistake. Bahhh.

Yesterday I went to the Bellagio to play some cash games and got a seat in a 300/600 seven card stud game which has been build around Morad from Afgahnistan – the guy is an action player, he played in Hamburg very often with me – the guy actually won a bracelet in the 2002′ $5,000 Stud event! Also there was Theo Jorgensen from Denmark, winner of the European Stud Championship, a old time stud pro from NYC whom I know for years and one of the best stud players in the world (in my view), a black guy named Walter Davis who helped me to improve my game over the years – not intenal of course, just watching and playing him made my play 5 levels better. The other 3 players were unknown to me. So not an easy task and I had not expected to play that high I had only like 18k on me, 30 big bets – in a stud game (stud has one more betting round) . So I was shortstacked but anyway, I killed the game. In about 3 hours of play I almost trippled my stack, leaving Theo and others clueless (he stood up in frustration after a while, he also lost aces full to a straigh flush in a huge pot vs one of the guys). The only player I could not win against was Morad, who rivered my two times, otherwise I would have scored 50k.

So, here in Las Vegas things are going well for Katja and me – Katja is now playing her day 2 in the Razz event, she is 14th in chips with 122 players left. I have no idea why she likes this game so much but she is very good in it. I hope she makes it to the money or even the final table. Probably she will not look this relaxed now while playing: 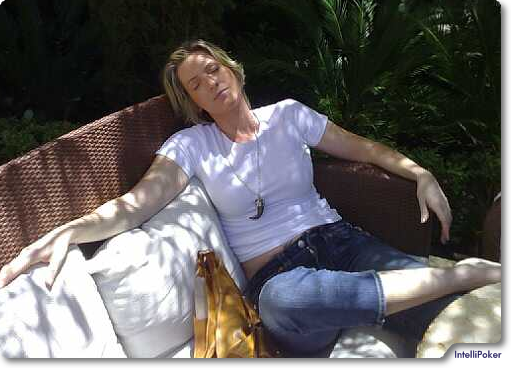