My day yesterday started with a big mistake – going to the WSOP an hour before the event was scheduled to start. Katja had decided to skip this event so I went alone. They had just closed the doors to the main playing area and everybody was gathering in the floors. It got so full that nobody could move. I managed to spend 30 minutes in the massage area, getting a nice should and back massage. Togehter with my Bose noice canceling headset I was able to escape the crazyness for over 20 minutes. They opened the doors at noon exactly but it took annother hour before the tournament could actually start. After waiting 30 minutes on my table when it was announced they are starting later so I strolled around. My table was placed in the new paviloun section with about 80 tables where it was hot as the desert because the doors never got closed. While strolling I meet many friends and observed Mike "the mouth" Matusow and Sheiky Sheikaram (famous for their WSOP arguments) playing some chinese poker on a table with the tournament stacks in action. 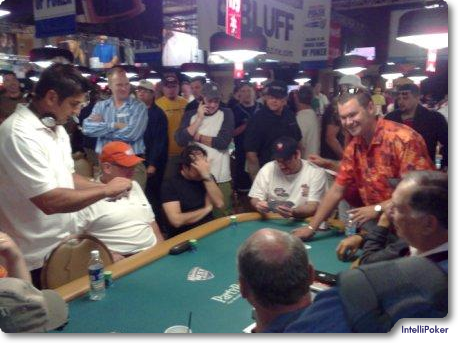 Watching them I had the impression that they either have become good friends recently or the whole thing between them was just made up for good TV.

The event #3 broke new records again, passing last years watermark by over 100 players to almost 3,000 participants. Play started and I have a very easy and nice table. I started the very first hand with flopping the stone cold nuts, holding :Jc:Tc and flopping :Ac:Kc:Qs, made straight and the royal flush draw. There was a bet and a call on that flop so I only called in the cutoff. After the turn brought the :As and it was checked to me so I did bet a little but everybody folded. With a better turn card I would have probably just checked behind to get out an value bet from one of my oppentents on the river. One thing was a little disturbing: this guy here 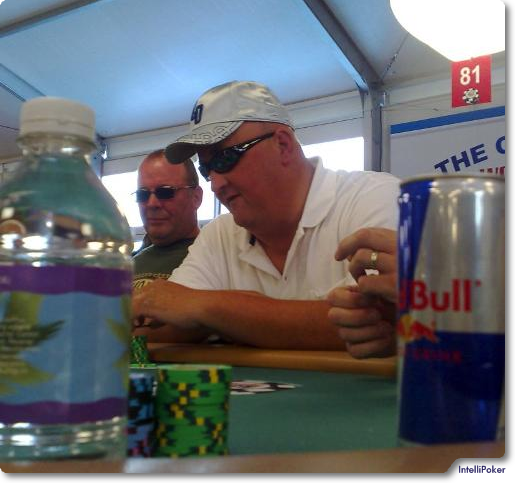 played the event like every decission is worth a million – you know what I mean. Placing a chip on his card. Removing it slowly when it is his turn. Looking forever into his hand, laying it down, placing a chip back on the cards, thinking, making sure the chip is correctly aligned on the cards, staring at his opponents, even talking to them sometimes – on every hand! I mean each and every hand. It took like a full minute alone for his preflop play. Each hand. But he was quite funny otherwise with a ultra-cool sense of humor. I called him Markus by myself as we have a famous comedian here in Germany who looks a little like this guy.

Of course Markus then gave me my first beat of the day, about 2 hours into the tourney: I was sitting on about 4,500 chips from my initial 3,000 and limped in middle position holding :6s:7s. Markus raised on the button, only I called. Flop was perfect, :Kx:7x:7x, horray. Of course I checked and he made a bet which I only called. Turn: :Kx! Uh-oh, can he have :Ax:Kx? I decided to find out and betted out about 2/3 of the pot, he called. River: one more :Kx! wtf?!?! I made a very small blocking bet which he called, showing :Jx:Jx. Uff, that was a nice pot! Shorty thereafter I lost :Qx:Qx vs :As:Qc – I reraised preflop, flop was all rags, I made a good size bet on the flop as it has two spades but he called, the turn was the :Ah, he checked and I checked. River was :2c he checked and I though my hand is good and made a value bet but he called with his AQ. So I was short stacked entering level 5. I trippled up to 6,000 with :8s:8c but had no chance thereafter anymore; I got all my chips in when there was an UTG limper and the small blind who was gambling a lot reraised. UTG limper folded. SB player had :As:Ks vs my :Ah:Tc and I busted shortly before the dinner break.

As usual, too tired to play anything so we had a nice dinner and I was sleeping before 10 p.m. on a Saturday night in Las Vegas – is that sick or what??