I forgot how times flies in Las Vegas (but only if bankroll <> broke). When did I play the $1,500 pot limit holdem event #3? I can hardly remember but if I look into the calendar it is only 36 ago that I busted out there, late into the day and reching the money. The day started with a big surprise, Katja and I not only got the same table assignment but also seats next to each other, 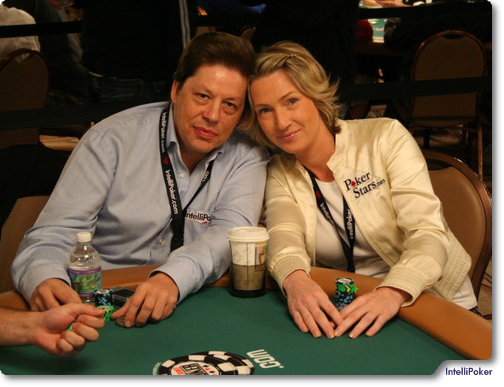 We did not recognice this until we said "good luck" to each other while rushing into the tournament area just to to meet again on chairs next to each other! After the first surprise and some jokes I informed the players that we are related. Being curious I asked the tournament director between a hand how the official policy for such things is. He informed me that, had we recogniced this before the very first hand, they could have given us a new draw on our request. It is good behaviour but not mandatory to inform the players like we did on arrival. It was not that important as our table broke already in the first level and that started a moving orgie for me – I got moved 8 times in 2 hours before arriving on table #6 where I stayed until the end of my tournament.

Long story short, both Katja and I made it to the pricemoney, Katja in 58. place and me in 56. place. The event had 781 players and 72 places paid. We both had our lucky hands inbetween to surrive the tourney, both drawing slim for splitpots. Katja was all-in with :Kx:Kx and found somebody holding :Ax:Ax to split the pot on a :Ax:Kx:Jx :Qx :Tx board (very dramatic hand) and I avoided getting crippled in this uggly hand: I had :Jx:Jx UTG, it was the last hand before the break and I was the one buying all the green chips from the table to speed up coloring up of the $25 chips (it is policy at the WSOP that somebody does this to gain speed). I raised the pot while stacking lots of green chips (according to Mike Caro’ "Book of tells" a sign of a very strong hand lol) and got 3 callers, including a very experienced pot limit player from London. Flop came :3h:4s:7c and I bet the pot right away, about a 2,800 bet. All folded but the London guy. Turn: :5h. I could not see the guy having a 6 in his hand considering his play that far and betted out the pot. I placed a large stack of 500 chips into the pot, more than my opponent had. He instantly said "call" and showed his hand, :6d:4d for the straight. Uff. I asked the dealer for a pot count and it was about 8,800 which was taken into the pot. He had some chips left and I had even more. Now some confusion about the situation as he had shown his hand. No ruling was necessary, we all agreed that his hand was live. The river brought the :6x for the open straight and we splitted the pot. Puhhh, big suckout.

I still got punished as this was my last big hand for 5+ hours and I was carddead since then. I was not really in danger of making it to the money when play got shorter but I lost my shot at making it deep into the tounrey on the way. Right after we have been in the money I lost almost all my chips with pocket :Th:Td vs :Jx:Jx. I came back a little with going all-in blind 3 times and winning (much fun and cheering) but then I lost my first real hand after hours :As:Ks vs :9h:9s in the BB. Finish.

It took almost two hours to process our payouts and we went to bed at about 4 a.m., I had bought myself into the $1,500 limit holdem event. Katja was tired and decided to skip this.

In the limit event I played almost 9 hours until level 9 and had rollercoaster ride. There was one remarkable hand when I won with quad 6’s vs. Aces full but I lost a very large pot with :Ad:Qd when the BB went all-in and one guy called 3 bets with A5 offsuit and call me all the way down on a :2d:5d:6s :Tc:Th board. I lost the large sidepot and also the mainpot (the guy in the BB went all in with :9x:6x) and left being crippled. I had some nice discussions with Rafe Furst and Andy Bloch who happened sitting on my table.

Other news is I did shake hand with Davood Mehrmand and we exchanged a few words to end our enemyship.

Today I will play the $1,000 NLH with rebuys – there was a discussion recently about my rebuy strategy in a tournament in Hamurg where I happend to take 12 rebuys (200 euros each). Those people with should see the $5,000 PLO with rebuys here – on Bejamin Kang’s table the average was 6 rebuys+addon and several guys have been in with 18+ rebuys. Today will be a crazy game also I guess. I have no predefined strategy, I need to see players and table number first to determine my strategy first. If my table is about to break soon I will play a tight game, if not I will most likely play the opposite of my table – if they are loose I will play tight and the other way around.