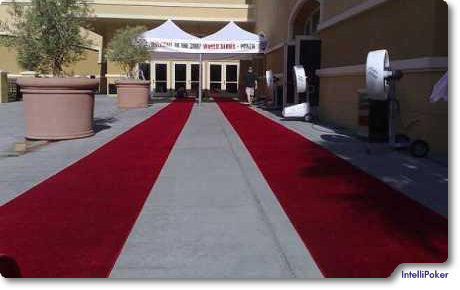 Yesterday I played the very first WSOP 2007 event, the $5000 buyin Mixed Holdem Championship. We went to the Rio at 8:30 a.m. and there was already a long line as the whole tournament area was still closed. We waited there well over two hours before finally reaching the cashier – the line behind us growed to the ridicoulous in the meantime, it was annoucned that more that 1,000 people have been standing in the line at any timeduring the whole day! After registering we went back to the hotel, visiting the PokerStars room at the Treasure Island Hotel and going to the Mirage Cashier about this forgotten money. As it turned out there was indeed some money left in my accoint there – $216! Well, worth the trip 😀 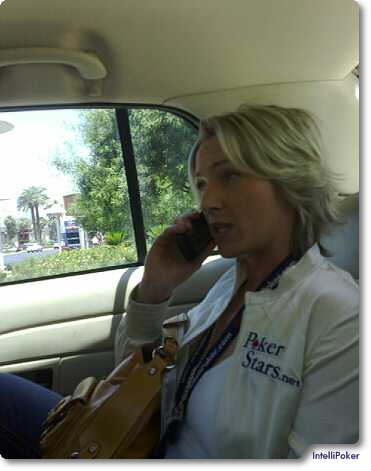 We arrived late at the Rio, about 1 p.m. but as we quickly found out the play had only started since 10 minutes and I was there in time to play my first blind so my inital stack of 10,000 chips was still intact. A quick look across the table – oh my god. Seat 1: Gavin Smith, Seat 2: Gavin Grivin, EPT Monte Carlo winner, Seat3: asian top pro which name I don’t know, Seat: some aggressive and experienced looking online-kid and Seat 5: Nick Schulmann, WPT Foxwood winner. The other players were unknown to me. After the first 40 minutes I got dealt :Kh:Kd on the button. UTG player raised to 275 and 3 players including both Gavins called. I decided to play deceptive and carefull and only called. Flop came :Qx:9x:5x, no draw except JT maybe. UTG player continued for 600, first Gavoin folded, second Gavin called, I raised to 2600. UTG folded, Gavin called again after some thinking. For whatever reason I knewed his hand at this time, :Ax:Qx. Turn came :Jx and he ckecked to me. I bet 4,000 and he checkraised me all-in, havin me covered. It took only 10 seconds for me, considering being beat vs. :Qx:Jx or a small set here but I could’nt fold. He tabled :Ax:Qx and the river was safe, I doubled up! Shortly after I took his remaing chips with :Jx:Jx vs. his :Kx:Qx. I sailed between 18k and 23k in chips for the 3 hours, having only a problem with Gavin Smith who outplayed me in small pots several times. 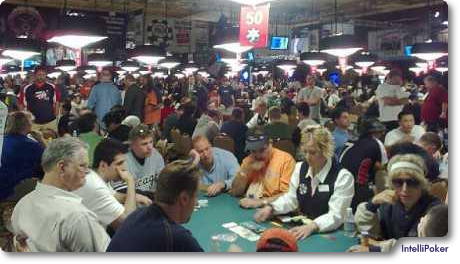 The Amazon room in the Rio Hotel – full to the maximum!

In level 5 things took some speed and I lost many chips: first I had :Kx:Kx again, raised big, was called by Gavin Smith, flop :4x:3h:Th, he check-called my bet, Turn :2s, he check-called again a large bet from me and the river brought the worst of all cards, the :5h completing the straigt if he has an Ace or the flush if he was looking for this. I checked, he made a 60% potsize bet and I folded after 2 minutes. Only few minutes later, :Kx:Kx again, UTG agressive onlinekid raised, I reraised, only he called. Flop all rags, he check called me with what I thought was :Ax:Kx or :Ax:Qx. Turn :Ax! He checked, I made a fearfull 4k bet (yes, that play sucked) and he raised me so I was forced to fold my hand. Weak on my side. I lost two limit pots and was down to 4k. I got this in on a nut flush draw which arrived and was back to 12, increasing again to over 20k within a few minutes thereafter.

I lost all this in level 7 when I had :As:Ac in UTG+1. I raised preflop, was called in two spots and made a pot size bet on the board of :Ts:7s:3h. One guy made a large reraise, other folded and I not even thought about it but re-raised all-in. He had :7x:7x for a set which held up and I was done. Katja arrived again an d we had an excellent diner in the Steak House in the Rio, going to sleep afterwards. Katja was out of the event very early when she went into a raising war holding a straigh flush draw omn the flop vs. a small set and lost.