Yes yes, long time since I posted, actually my last post is from WSOP times in Vegas. The reason is simple, I don’t have any time. IntelliPoker is eating all my hours. Talking about eating (omg how elegant did I make this switch?), I have been eating to much this year. Way to much. I feel perfect with 90kg, I can live with 95-100 but now I reached like 114!

How do you change this when the whole office staff on many days orders not one time pizza for lunch but another round, for dinner? For me, there’s only one answer: make a bet. A big bet. Having a perfect history of winning every single weight bet I entered so far (about some I blogged here and the money I won from guys like Steffen, Frank or Norman was very sweat) I figure myself to be a favorite – same as when I sit down on any poker table btw :D.

So, I looked for a mighty opponent during the last months and now I found even two – Andre Herzog and Klaus "B@nd!t" Hausmann. Both have agreed on a weightbet with me yesterday. Here’s the deal: 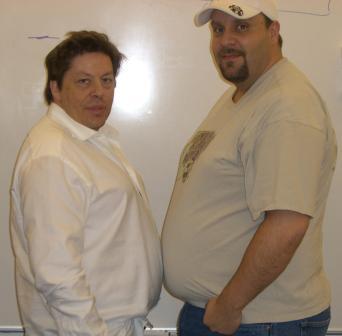 On a funny sidenote, the weight from Klaus is a guess. My scale ends at 150, Klaus ends at 165. He convinced me that the scale was "showing something this morning" but the final pizza we ordered for lunch must have been to much, the scale showed "overloaded" lol.

My thoughts regarding this bet: I will win it, by far, lossing about 25% of weight overall. I will be behind both opponents at one point, probably by end of this year. But ovcerall I believe Klaus will take the buyout option, probably after 3-4 month when it is still relativly chep to get out and Andre will give me a hard fight, not taking any options but being behind at the end by 5-6%.

Any poker? Yeah… when I play online I usually get my owned, in the limits 50/100 and above you really need a good game and playing while working is a bad idea. Live poker is almost non-existing for me, with the exception of the EPT Baden, where I played all three big tournaments (without any success). I played 40+ hours in the lovely PLO sidegames but thats it. Next stop? PCA in January, I won’t go to Dublin, Prag or the German Championships :(. Spending a week in Las Vegas in December for the Bellagio Series sounds promising but I doubt I can make it there. Katja of course goes to all of those events and some more, Monday she leaves to EPT Dublin.

So, at least until the Carribean Adventure in January this will probably be more of "whats the hell made me make this damn bet" kind of blog than a poker blog.