My own play the last days is not worth many words: I played the $5,000 limit holdem holdem championship event on Sunday afternoon and lasted for like 5 hours, I guess the minimum you can expect with 10,000 starting chips. I can say that I donked off about 50% of my chips with playing just plain bad and 50% with getting "unlucky" – like this – I raise with :Ks:Kc in early position, get a caller on the button, we see the flop of :Kd:3h:7s heads-up, I bet, get a raise, smoth call only (ohh so tricky, lol, but going for a check-raise on the turn is common practice in this spot) and check the :Ah turn, guy bets, I raise, he re-raises me. I thought fine! guy has AK or set of 7’s and fired one more bet which he only called (I believe he thought betting was capped which is wrong). River is harmless and I fire out, he raises, I three bet and he raises again, before I call I know I am likely beat and indeed he shows me A-A. That happened at limit 200/400 so this and other hands like this costed me lots of chips. Being in 3-way preflop capped pots with hands like :6s:4s also did not really help my stack… my play sucked there, period.

The $2500 NLH event was no difference, I lasted not even 2 hours, when I had the nuts I got no action and when I was behind I gave action. Bad combination. 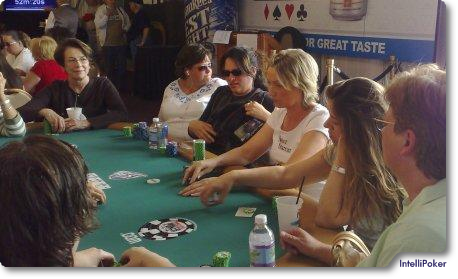 Katja in the Ladies Championship, Day 1

Katja did a lot better. I was railbirding her $1,000 NLH Ladies Championship event day #2 from the beginning at 2 p.m. There were 65 ladies left and Katja had more than average chips. I have to give my greatest compliments to Katja here; she was the most professional, most cool woman in the whole field. Her fearless reraises of Vanessa Selbst, who was the chipleader at the time have been deadly. Katja reraised Vanessa four times in 60 minutes and Vanessa had to give it up each time to the point where Vanessa loudly complained and anncounced moving all-in blind on Katja’s next reraise and – boom! – Katja reraised again and Vanessa gave it up one more time. Sounds easy and funny but to actually do it even if your hand is worth it takes a lot of nerves. There were 100’s of spectators and lot of media people around.

Without ever being in danger Katja came down to the last 10 players, the real final table, when the first critical situation arised. Katja had 340,000 in chips, on the button. UTG player, with as many chips as her, made a large bet, like 50,000 with blinds at 6/12k. It was folded to Katja. I knew imeediatly from watching that Katja had picked up a big hand. She asked for a count of the raisers chips and thought about the situation for like 4 minutes. Finally, she gave the hand up. I told the specators around me that she must have had :Qx:Qx – no other hand would take her so long in that spot. Shortly after Katja came over and told me that was exactly what she had there.

Not long afterwards a lady busted and Katja made her first WSOP final table! Congratulations! It took me 7 hours standing on the rail, sweating with every hand, so see her achiving her greatest success so far. I mean there have been almost 1,300 ladies in this event and playing through this minefield is a serious task. She is about 4th in chips now but with all womans being close.

Aftert the day we discussed with Vanessa Selbst about the QQ hand – Vanessa said she would have called there, seeing a flop and playing the hand in position then. I disagree – a) only calling here is weak, those ladies have all kinds of strange ideas, UTG raise could have been done with any kind of hand (although not very likely) so she has to raise here to see where she is at in the hand and b) the value of reaching the final table itself is higher than those of possible more chips. Most likely she would have won the pot before the flop, adding "just" 70,000 chips to her stack of about 340k already – not that big a difference. I would say the chance of getting her opponents full stack is about equal as losing her full stack. If she gets a call or a reraise the best she can hope for is being a slight favorite vs. A-K. Overall, I fully agree with the decision there. Well done.

The final table will start today at 2 p.m. – I skipped all of todays events to be able to railbird her again.