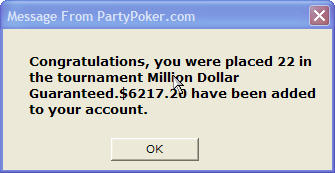 Wow, good news is I got money in the Party Poker Million Guaranteed last night. Finished 22. out of 1727. Good news also is that I played very well the whole time. Over 6,000$ sure does not hurt. Bad news is, we need some new dishes as Katja got so disapointed when she busted out that she need to throw something and the dishes from our dinner were right available… she got some horrible beats from ridicoulous hand, nothing special for everybody used to these party poker games, when she went all in holding some trips only to loose against some miracle back door flush that does not have the hand, the position nor the stake to be there at that time in that pot. Anyway she busted out and I had some 10 minutes, oh wow.

I got nearly out very early by a one-outer on the river (hey, I am the guys with the outs!) when somebody limped with KK, I limped with AKs, the flop came 27A rainbow, I bet, he raised (!), I went all in, he called with all his money, turn is 9 and river is – case King. Oh yeah. I had only some spare chips left but made my way. I felt already very lucky to reach the money (130 paid) and got even more exited when we came close to the last 50 players. But then my cards dryed up, I got no good hand for about 2 hours so I got crippled. When 3 tables were left I managed to steal some blinds for the first time and got KK the very next hand. The chip-leader who made a lot of pressure and raised UTG or more than I had, I went all-in with KK, no one else stayed in, and the cards were opened: QTo against my KK. FLop is 29J giving him a straight draw and backdoor flush draw. When the King hit the turn he made the straight and improved to a fluish on the river, I had no help for my boat and was out in a then disturbing 22. place. This is the second time this year Kings betray me right when the money gets deep (in the 5,000$ no-limit holdem at the Bellagio in April I got them when only 20 players remained, 18 getting money, I hold average chips, get QQ, loose against AK (Barry Shulmann), get KK, loose against AK (David Pham I believe) and get nothing after 14 hours of hard work. This was the “power went down” event, the money got splitted as the could not play the final table the next day due to the power outfall).

If I had known in advance to get that far I would have been very happy – now I feel like a looser and think about the 200k for first place which would have came very handy. I really need to do some shopping with Katja to get us back on track, lol. Sometimes I forget how much money we move over the tables and how valuable a hundred could be… damm it, let’s play some more now!