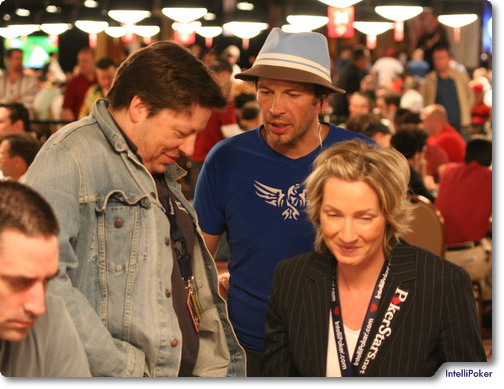 I played and survived today long hours with:

– Phil Hellmuth (out)
– Josh Arie (out)
– Robert Willamson III (out)
– Jason Strasser (out)
– Dewey Tomkow (eleminated by me)
– Thomas Wahlross (out)
– Michael Gracz (eleminated by me)
– Howard Lederer (out)
– three top online pros which names I don’t know (2 taken out by me, ‘raszi’ still in)
– two well-known live game/tournament pros which names I don’t know

It was a very though game today and I played my very best game, except in one hand very late today (which costed my 70,000 in chips right away) when I could not stop my fast playing in time and called an all-in bet to fast and without proper thinking. I even gave my first autogram today, lol.

This is what Jason Strasser wrote in his blog:

Though tables are no fun

Unfortunately, i have to report that I am currently at the toughest table of my WSOP career. Robert Williamson III, Thomas Walroos, and a good online European player (Raszi) round out my table. There are really no weak spots at the table.

The entertaining factor of the day was Phil Hellmuth, which whom I talked very much because "he couldnt figure me out" – lol. I doubt I will be able to report tomorrow because besides the fact that I play day two of this event at 3 p.m. I will nevertheless play the $1500 NLH at noon (this is crazy, I know and I would give my ticket back this time – but to do so I need to go over there to the Rio tomorrow and if I am there I can also play ;).

More about all this on Sunday.